Boss / Roland And Everything Music

Pepe, do you still have that Hotone deal where they send you pedals to review and keep?
Top

I haven't heard from them for more than a year ago. And they won't add new pedals to the Skyline series anymore, which I find a bit sad. The cool thing is that the series covers almost everything that a musician asks for.

Oh, and I will possibly do the family snapshot in the next days, Laurie. The last few weeks have been very hot in these parts of Europe.
Pepe at YouTube and Instagram
Top

I bought this from a seller in Finland for a buyer in Serbia: 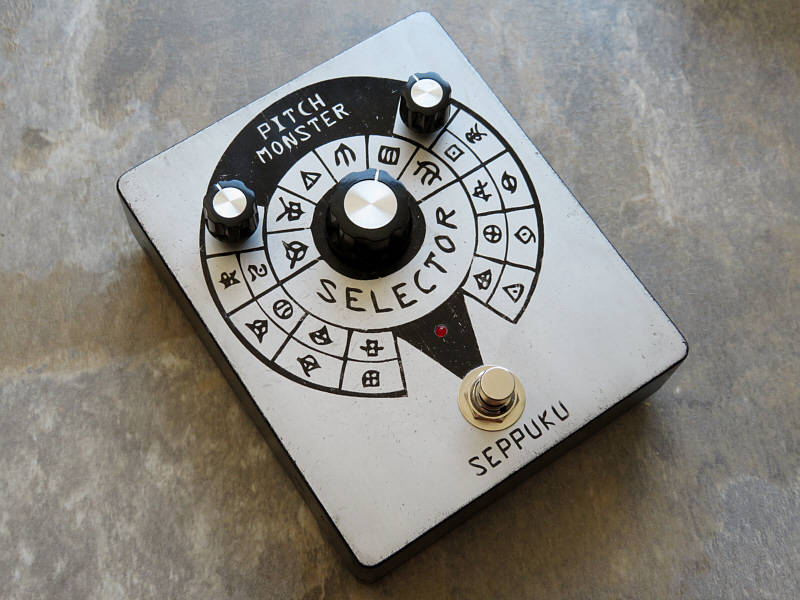 Quite nice unit, but overall it's a slimmed-down version of the Seppuku Digital Pitch Modulator that I have.
Pepe at YouTube and Instagram
Top

Had hoped to be welcoming an OC-5 into the collection today but, sadly, it was not to be. Instead, this little cracker showed up early and will keep me occupied. Initial impressions are that it does the muff thing extremely well - all fat and fuzzy with the tone switch on and the treble rolled off with sustain at max - I’m in happy fuzzland now

Thanks BearBoy ! Very chilled out today just messing around with guitars, pedals and gear. We can’t have parties these days but I reckon this was a good enough substitute.
Top

Those pedals are really in pretty good shape. The DST-1 and PHS-1 are in pristine condition - the DST-1 was NOS with the box and papers and the PHS-1 did also come with the box. Additionally I have a certain paint from the plastic model maker Revell that I can apply on the nicks to make the pedals look almost new. The paint really matches with the original colour. But I only did that with the TNB-1 which had lots of nicks when I received it.

Those are my DST demos. The DST-1 is the better DS-1 to my ears. With much less gain, though, but overall with a very natural sounding distortion with lots of dynamics. I think that the DST-3 shares a lot with the HM-3 which came out many years later. The tone control is similar to that of a Big Muff Pi.


Great, I was wondering if all those Korgs were based on something original. What about the other ones Pepe, like some of the Boss pedals or are they very different?
Cheers!
Top

They are all an own breed by KORG. They are in no way comparable to existing BOSS pedals. I have had them all, with the exception of the CMP-1 Compressor and the NGT-1 Noise Gate.

CHR-1 Chorus
A totally different chorus effect in comparison to the CE-2. The CE-2 offers a very strong effect in every setting so that I prefer the CE-2B with the effect volume knob. The CHR-1 can get a bit in the CE-2B territory, but the overall effect is different. I think that the BBD chip has a shorter delay time, hence the flanger sounds that are possible with that switch. Oh, and it has a great vibrato sound if you put a dummy plug in the stereo out jack. Demo here.

DST-1 Distortion and
DST-3 Hard Dist are mentioned in the quoted post above.

FLG-1 Flanger
Again a pedal that looks like a BOSS pedal at first glance, but the sound is not like a BF-2. The FLG-1 is a really wild thing with deeeeep flanging sounds (longer BBD delay time, I suppose) and a factory-set ability to oscillate like crazy. I really prefer this one over any BOSS flanger, even the BF-1! Demo here.

LIM-1 Limiter
I received this one a few weeks ago. It is a good pedal which does a nice job, but the effect is more gentle than that of a BOSS LM-2. Or better said: the LM-2 is able to create much heavier limiter effects. The LIM-1 is a "set and forget" pedal: once dialled in it is perfect for your funk bass tunes. It has a lot of headroom in store and takes very high signals, which makes it also a good pedal for keyboards.

Korg OCT-1 Octaver
I really LOVE it! It offers only a one octave down effect, but it is such a powerful sound that you don't need a second octave down mode. Although nathanscribe might not agree I think that the tracking is phenomenal: it goes all the way down to the low E of a bass guitar. The polarity switch makes tracking either better or not. The function is only vagely described in the manual and nathanscribe tried to explain to me what can be read in the schematics. If I remember it correctly the input signal undergoes a 180°phase inversion so that the octaver circuit can work more accurately. Anyway, in mode "A" it's awesome with my Jazz Bass and mode "B" is great for my guitars. A demo will definitely follow later this year.

Korg OVD-1 Overdrive
This is by far my favourite pedal of this KORG series. It produces such a lovely overdrive sound with a lot of tube amp character. In my eyes (or ears) it is perfect. It doesn't have the mid-hump of a Tube Screamer (which I always found annoying). It rather shares a bit of the BOSS OD-1 sound, but with a more lively sound and lots of warmth. A demo is in the making and will also be published later this year.

Korg PEQ-1 Parametric EQ
As you know I received a BOSS SP-1 Spectrum a few months ago. Well, the KORG PEQ-1 is pretty much like an enhanced SP-1 with an added Q knob, called "Bandwidth". I really shouldn't have sold it, but I need money at that time when I did. A very rough demo here.

Korg PHS-1 Phaser
A simple two-knobber. At first glance you think it might be based on the BOSS PH-1, but it is not. I had the PH-1R a while ago and the PHS-1 has only some sonic overlap for the fact that both models work with 4 stage phasing. I think that it rather shares a bit with the EHX Small Stone sound (without the resonance mode). I like it a lot. It is a good workhorse if you want that distinct '70s tone and I definitely prefer it over the BOSS PH-1(R). A demo will follow in the next months.

Korg TNB-1 Tone Booster
What. A. Beast. When I heard that this booster is capable of producing a rough overdrive sound on its own I clearly HAD to buy one. And I didn't regret it. The overdrive sound is quite unique (fuzzbuzzfuzz said that it gained some cult status in Japan) and the clean boost functions are very versatile. Demo here.
Pepe at YouTube and Instagram
Top

Pepe thanks for detailed response.
I do have the limiter, and yes it is more subtle that the Boss LM-2.
Cheers!
Top

just ordered a Karma MTN -10 (Ibanez Mostortion clone) will take a while to get here, will update you with my impressions when it arrives

Return to “Pedals - All Brands”