Boss / Roland And Everything Music

Yesterday I received a parcel from England. Our dear nathanscribe, who was a very active SBZ and BossArea forum member years ago, repaired a vintage KORG SD-200 Signal Delay for me. And the parcel also contained the sought-after Pearl OC-07 Octaver. I was able to grab one for a reasonable price at Gumtree/UK and nathanscribe forwarded it to me. 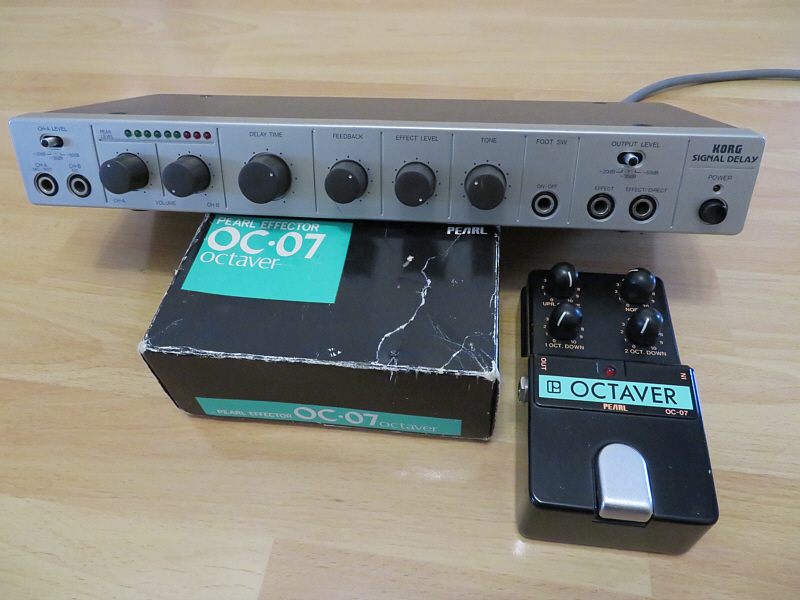 The analog delay is really good at doing that typical slap-echo sound. The tone knob offers some sonic variations. It has a pretty high maximum delay time which comes along with a nice aliasing sound. Feedback can go to self-oscillation. All in all a solid early BBD unit which has (to my big surprise) originally been designed by Maxon (-> Maxon AD200). To my knowledge there haven't been any other collaborations between KORG and Maxon (I might be wrong, though).

The concept of the Pearl OC-07 is very similar to that of my beloved KORG KOT-401 module "Octave V". The Pearl Octaver offers two octave down modes plus an upper octave mode, which is generated by an octave up fuzz or something very close to that (the KORG KOT-401 works in the same way). The sound is really nice and warm in the low octaves and the upper octave is really cool and it freaks out in a great way if you play polyphonic stuff. Like the BOSS OC-2 it tracks best beginning at the D of a bass guitar in standard tuning. Overall tracking is very solid. Like all the other analog octavers the OC-07 cannot beat the tracking of the KORG KOT-401, which goes all the way down to the low E of a bass guitar and offers overall superb tracking and it responds to the guitar's dynamics in a beautiful way. So it cannot replace my "Octave V" at all. But it's a great early compact pedal and those who don't know the KORG unit are allowed to say that the OC-07 is the best octaver ever built.
Pepe at YouTube and Instagram
Top

The OC-07 is absolutely on my list but over here its about 20,000 yen used. I thought it was very clean when I tried one even on the upper octaves, and therefore very different to my MutliOctaver Guyatone (which is all fuzz).

I had an OC-07 many years ago. Definitely one of the best octave pedals out there. Extremely rare here too...
Top

Nope. Something totally Pepe-typical. I'll wait for the parcel and send pics and more information once it arrives.
Pepe at YouTube and Instagram
Top

Not another one of these Korg modular multi-effect units?

"People who are late are usually in a better mood than the people waiting for them to show up."
Top

It's not really a KORG pedal to be exact. But it's the most expensive pedal that I have ever bought.
Pepe at YouTube and Instagram
Top

Pepe's most expensive pedal ever... I have to see this one!

The big and expensive pedal has arrived today!

This is the ultra-rare Keio "Synthesizer Traveler" from 1973. Keio Electronic Laboratories was the original name of KORG (Keio Organ). So it's indeed some kind of KORG pedal again. 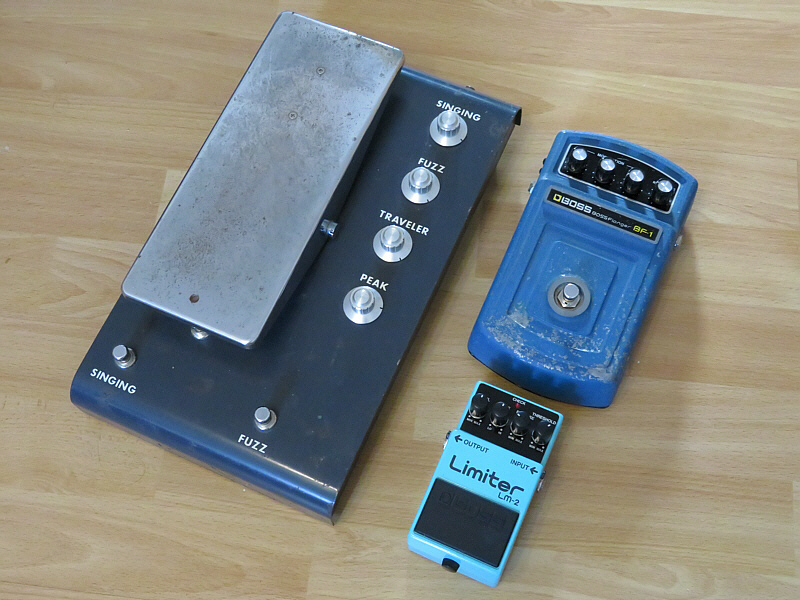 It has the size of three BF-1 pedals - or almost 9 BOSS compact pedals!

The so-called "Traveler" is a tone filter that was already built into the first Keio organ prototype in 1970. The first KORG synthesizer generation did also have the Traveler filter system (my awesome KORG 800dv has two low-pass-filters and two high-pass-filters that sound like a dream!). In this case it's a low-pass-filter that can be combined with the fuzz. It produces cool wah sounds, especially with a good dirt pedal after it (the fuzz is first in the chain). The "Singing" mode is an oscillating sound that can also be combined with the fuzz, but not with the filter. It sounds pretty much like a Theremin. The knobs control the volume of each mode and the "Peak" knob controls the filter resonance.

Overall it's a great sounding early pedal. There aren't many of these around today and I doubt that Keio produced them in large numbers. I'm absolutely happy that I'm able to finally try one out for myself.

Return to “Pedals - All Brands”